Here are the rest of the decent pictures from the Cars and Caffeine event I went to on Sunday. All of them (except for the digital ones you already saw) were shot with my Canon Eos 1n, with Canon 24mm f/2.8 IS USM lens on Fuji Superia 400 film. 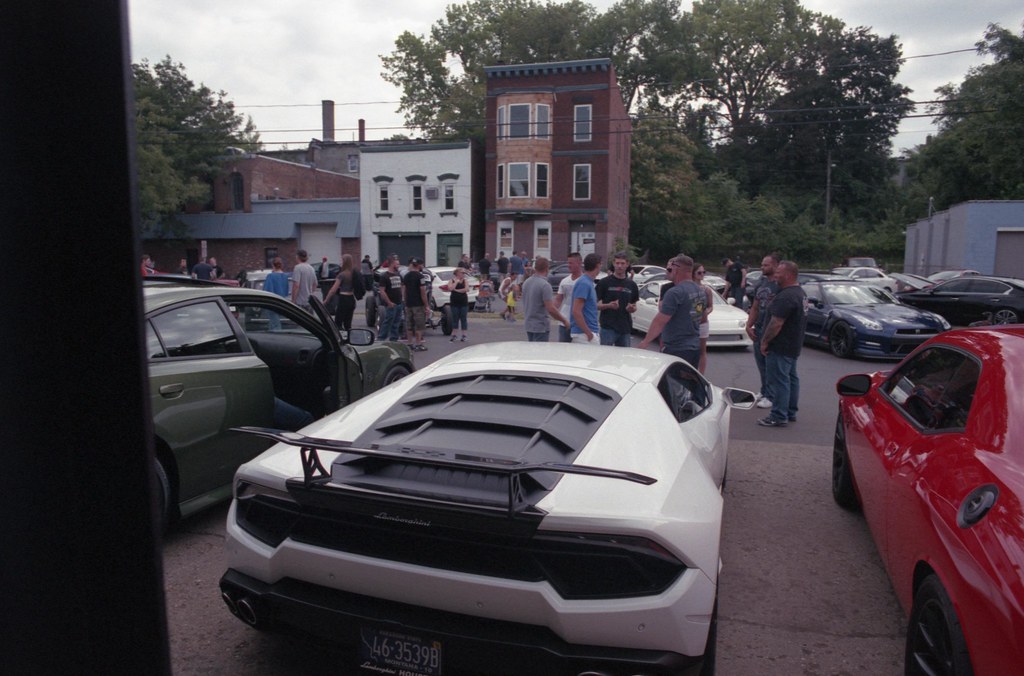 I currently have in my possession four cameras of different types (five, I suppose, if you count my mildly broken Canon AE-1), one of which is a Rolleicord. For those of you who don’t know, a Rolleicord is a TLR, or twin-lens reflex, camera, which means it has two lenses. The top lens provides the image for the viewfinder, and the bottom lens exposes the film. This was a common setup until the 1970’s when SLR (single-lens reflex) cameras became cheaper.

I bought it because it was probably the least expensive way to get started with medium format photography. As you can see, the 6x6cm image created by this camera is significantly larger than the 35mm that most people would consider normal, and it’s enormous compared to the APS-C size image sensors in many digital cameras.

I really like this camera, mainly because of the images that come out of it. The pictures have a quasi 3D feel to them that 35mm film and digital just don’t. It’s fairly easy to take candid pictures with this camera thanks to the top mounted viewfinder and extremely quiet leaf-style shutter. Since you have to look down into the viewfinder, most people don’t realize you’re taking a picture.

The main issue with the camera is that the picture-taking process can be slow, especially if the lighting conditions are changing. There is no built-in exposure meter, so you have to supply your own. I’ve been using an app on my phone since I got the camera, with totally fine results. The app imitates an old-school analog meter though, so the result it displays is kind of “fuzzy.” It gets the job done, but a real exposure meter would really add some convenience.

I have a car show coming up on the long weekend, so I thought I might order a cheap one on Amazon and give it a shot. Turns out, there really aren’t any cheap exposure meters out there. I was hoping for something around $50, and I’d even take a used one, but there doesn’t seem to be anything in that price range.

It finally hit me today that I could probably make my own exposure meter with more features for less money than I could buy one. I really love making things rather than just buying them if I can, even if it doesn’t save much money.

For this project, which has been done a couple times before according to the internet, I’ll use an Arduino to read a TSL2591 light sensor and show the results on a small OLED display (I’ve wanted to use an OLED display for ages). I’m not totally sure yet how I’m going to change settings on this machine, but I’ll come up with something. I’ll draw up a case for it in SolidWorks and then 3D print it.

I’m pretty excited about this, because it’s been a while since I’ve built a thing. I’ll try my best to post some updates, but there will definitely be one when the whole thing is finished.

So I discovered another capital region car show the other day, and just in time. For this season, I’ve been trying to attend as many car gatherings as possible. I’ve probably spent most of my car show time at the Hemming’s Cruise-Ins in Bennington, Vermont. The last one of those was Thursday, so I was looking for other shows to attend around the area. Luckily, I stumbled upon a Cars and Coffee type event dubbed Cars and Caffeine just a couple days before it was scheduled.

I don’t know how I hadn’t heard of this event before, because it’s pretty large. A couple of blocks of River Street in Troy are closed down and there is a diverse collection of cars displayed on the street. I believe this event is hosted by a custom shop on River Street called 1945 Speed and Custom. They had their shop open and it seems that, like the show, they work on a diverse array of cars.

I only got a couple digital pictures worth sharing, but I went through a roll of Fuji Superia too, so I’ll have to see how those came out later this week. 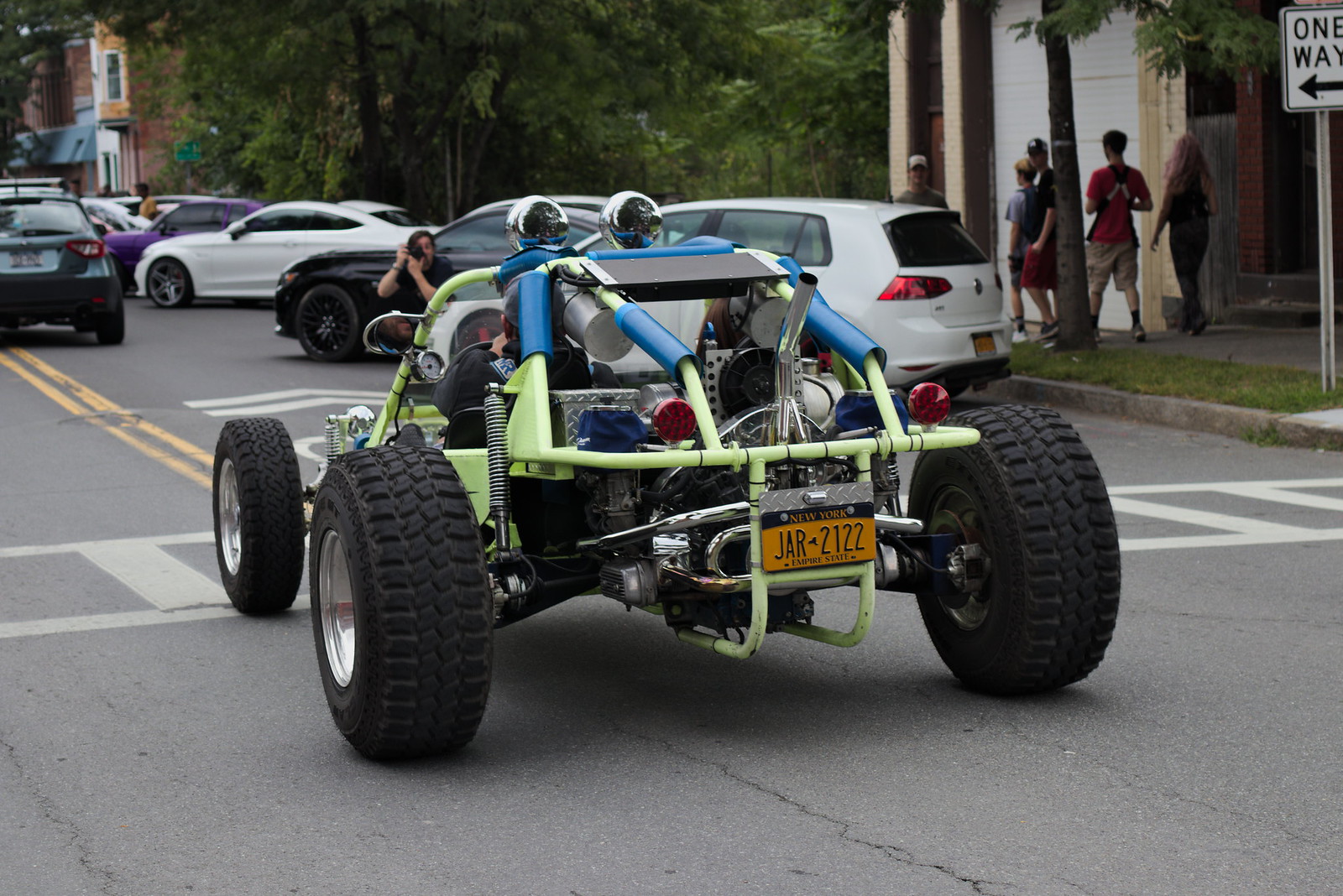 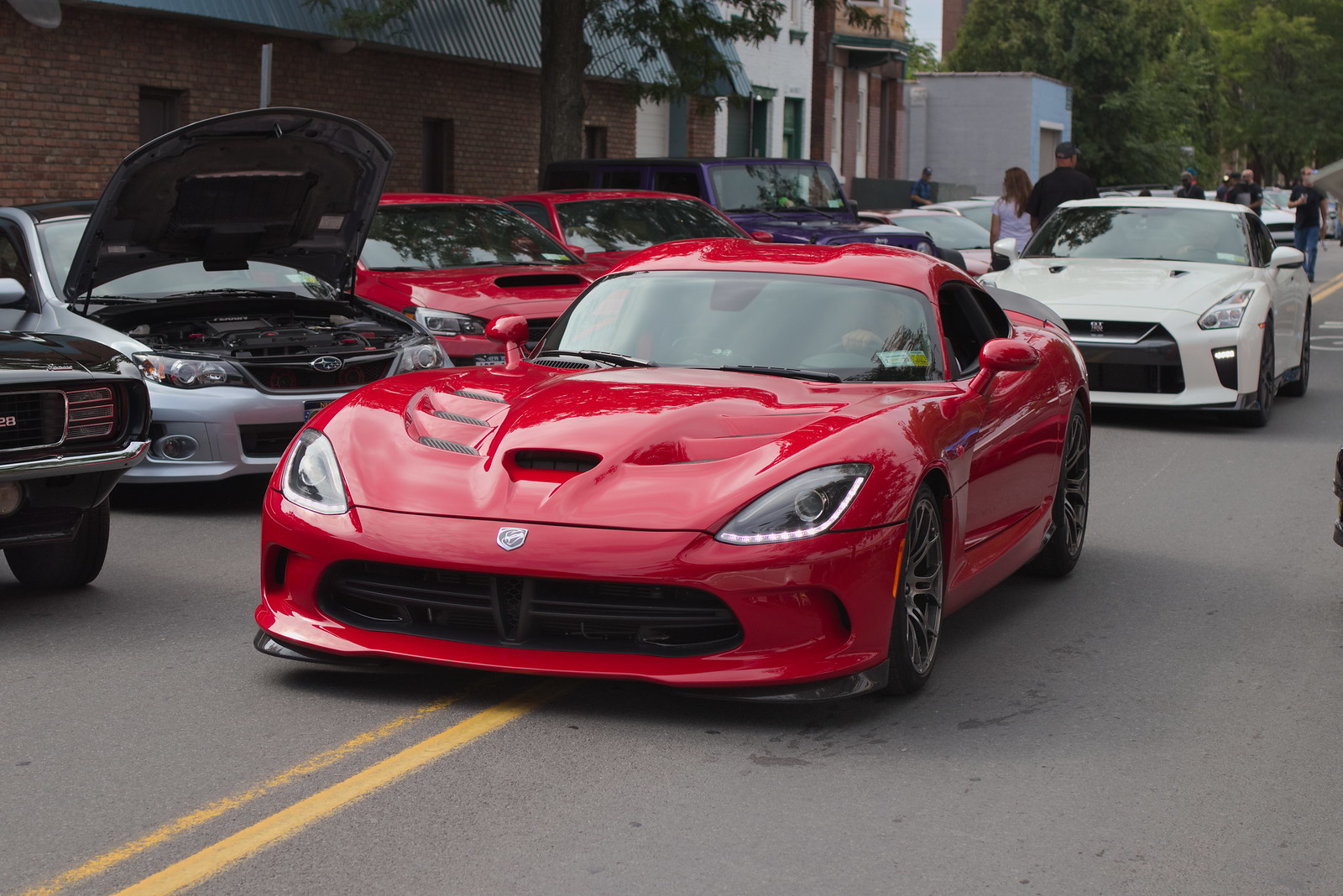